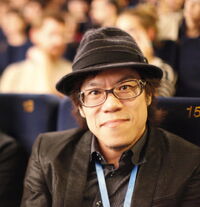 Keiichi Satō (さとうけいいち, ) is the director of both Genesis and Virgin Soul.

Satō originally worked as a character designer who also supervised animation for various anime series. After metting Kazuyoshi Katayama, he began working on The Big O in 1996. He considers The Big O his magnum opus.

Satō's style is influenced by his "love of all things nostalgic."

Satō directed the Kuroshitsuji 2014 film alongside Kentarō Ōtani. The film was based on the manga of the same name by Yana Toboso. He also designed characters for Unofficial Sentai Akibaranger, a Japanese tokusatsu comedy series based on the Super Sentai series.

Retrieved from "https://shingeki-no-bahamut-genesis.fandom.com/wiki/Keiichi_Satō?oldid=10838"
Community content is available under CC-BY-SA unless otherwise noted.